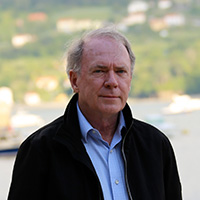 Roger Hayden Johnson has been painting since the age of ten, when he begged his parents to buy him a set of oil paints after watching the movie "Lust for Life," in which Kirk Douglas played the role of Vincent Van Gogh. He taught himself to paint the landscapes near the small Iowa farm where he grew up. He later studied art at Central College in Pella, Iowa, and earned a master's degree in art and art history at the University of Northern Iowa and a Master of Fine Arts degree in drawing and painting at Drake University in Des Moines, Iowa.

Johnson met his wife when they were both first-year teachers in a small Iowa town--she was teaching French--and the couple spent a year in Paris, the first of many visits to Europe. For Johnson, it was an invaluable real-life immersion into the art and architecture he had studied and loved, complete with evening art history classes at the Louvre and regular all-day Sunday visits to the famed museum.

Johnson started out as a landscape painter, working primarily in the Southwest, but also in Europe. He began painting boats in 2008 during a tour of the Greek islands. He has continued searching for his favorite subject matter - traditional wooden fishing skiffs - in harbors in Portugal, Spain, France, Italy, Malta, Croatia, and Corsica, as well as in the United States.

Today, Johnson lives in Colorado Springs with his wife, Mary, who works for the Library of Congress. They have two grown children--Allen Hayden Johnson, a Web developer in Denver, Colorado, and Anna Elise Johnson, an artist in Los Angeles, California.

Roger Hayden Johnson's works are found in private and museum collections all over the world. His current paintings are available through Raitman Art Galleries in Breckenridge and Vail, Colorado; The Marshall Gallery in Scottsdale, Arizona; 88 Fine Art in Laguna Beach, California; Arcature Fine Art in Palm Beach, Florida; and Gallery Valentine in East Hampton, New York.